The Genshin Impact leakers have returned, and this time the leaks go beyond the upcoming version 3.0 update, claiming to confirm character banners in 3.1. We previously got the names of the characters who will appear in future 3.x patches, and now recent Genshin Impact 3.0 beta leak has revealed new information on the characters who will undoubtedly appear in the 3.1 update. Candace, Cyno, and Nilou are among those on the list. The rarity and banner debuts make sense because, based on previous banners, HoYoverse rarely releases three completely new five-star characters in a single update. Candace will almost certainly appear on the same banner as Cyno or Nilou — or possibly both — just as the new Anemo four-star, Heizou, is currently available on both Kazuha and Klee’s rerun banners in version 2.8. 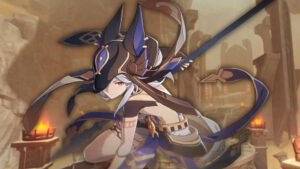 For those unfamiliar with the other characters mentioned, Cyno—who is depicted in the article’s featured image—was first introduced in a recent trailer that teased Genshin Impact’s future. Candace and Nilou, on the other hand, have not yet been officially revealed.

In addition to the trio mentioned above, there are still a number of new characters that will debut earlier. Tighnari,Collei, and Dori will be available to pull for in brand-new banners once Sumeru is introduced in version 3.0.

Shikanoin Heizou’s arrival brings the total number of Genshin Impact characters to 53. While some of them are quite powerful, others require constellations to reach the top tier, and still others are simply not good […]