Scaramouche has been one of the most eagerly anticipated Genshin Impact characters since the game’s early stages. Now that information about his kit has leaked, the Genshin community has been shaken. In this article, we’ll go over all of Genshin Impact’s current leaks on Scaramouche – the sixth of the eleven Fatui Harbingers. 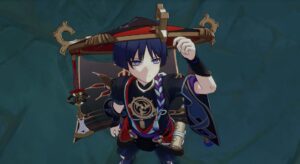 It has been claimed that Genshin Impact players will receive the Scaramouche banner when he debuts as a weekly boss. Furthermore, a new 4-star character named Faruzan will appear on Genshin Scaramouche’s banner.

In addition, Uncle DD alt previously revealed that the Scaramouche release date is set for 3.2. Now, these leaks are consistent with other sources’ claims about Scaramouche, who stated the following:

[Reliable – Uncle DD Alt] Screenshot is a reply to a DM asking about Cyno.

"I don't remember [about Cyno], but Scaramouche will be playable in 3.2. You can save this [screenshot]. I will keep running."

While Scaramouche was originally thought to be an Electro user, recent leaks have revealed that the upcoming Anemo user described as “Wanderer” in the game’s files, according to the reliable leaker @hxg diluc on Twitter, is actually a Wanderer. According to the leaks, Scaramouche loses his ability to use Electro as a result of his delusion.

"Wanderer" delusion is anemo
He cannot use electro anymore I think, due to his redesign

Players appear to be very disappointed with the information we currently know about Scaramouche, but it’s important to keep in mind that these are still just leaks and could change at any time. Players won’t know for sure until more information is made available whether these changes make sense in light of the game’s future story.

The Genshin Impact leakers have returned, and this time the leaks go beyond the upcoming version 3.0 update, claiming to confirm character banners in 3.1. We previously got the names of the characters who will […]