In this Xenoblade Chronicles 3 guide, we will go over all of the Taion’s Quiz Answers in the quest “Theoretical Knowledge”.

In Chapter 3, Xenoblade Chronicles 3 introduces sidequests and optional content. Once you’ve obtained your first Hero in Colony 4, you can return to Aetia’s northern region to visit Colony Gamma for the first time – the Colony where Mio’s group was stationed during the game’s early events. 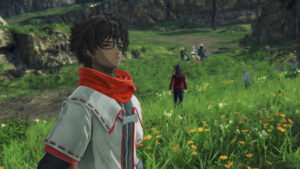 As soon as you arrive in Colony Gamma, you must start the quest “Going Beyond Power” to enlist Teach, one of the game’s first Heroes. Once you’ve completed this, you’ll be able to unlock the quest “Teach’s Teachers,” which is a game-long quest with several sub-quests. While you won’t be able to finish “Teach’s Teachers” until much later in the game, “Theoretical Knowledge” is one of the earlier sub-quests. All of this and more can be found in our Xenoblade Chronicles 3 Quest Guide.

Taion quizzes the residents of Colony Gamma on some quiz questions in Theoretical Knowledge. You will be asked two sets of questions. While you only answer five questions in each set, the questions are somewhat random and drawn from a larger pool. You can win the quiz contest despite the fact that it appears to have no effect on the game. The results card given at the end of the quest will tell you if you won or not.

Xenoblade Chronicles 3 is an action role-playing game in which up to seven party members can fight at the same time, including the main party of six and one of several different characters who appear […]