To kick off week 14 of the NFL schedule, the past and present of the City of Angels gridiron history collide. On Thursday Night Football, the suddenly surging Las Vegas Raiders travel to face the fading Los Angeles Rams. 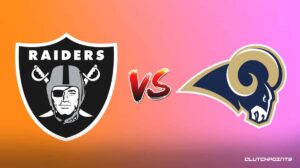 Related: The Cowboys are wary of Odell Beckham Jr. as the Giants pursue a contract extension

DT Aaron Donald is officially out for the Thursday night game due to an ankle injury he suffered last week. Travin Howard (hip), Terrell Lewis (back), and David Long Jr. (groin) are also out.

With John Wolford out with a neck injury, it’s unclear who will start at quarterback for the Rams. The team could go with Bryce Perkins or Baker Mayfield, both of whom they claimed off waivers on Tuesday.

Ben Skowronek (shoulder) and Brandon Powell (ankle) are both questionable to play for the Rams.

After two days of Raiders walkthroughs, RB Josh Jacobs (quad/calf) is questionable to play against the Rams on Thursday.

Jacobs appears to be a lock to play after being listed as questionable last week and ultimately gaining 144 yards on 26 carries in a win over the Chargers on Sunday.

Although a short week isn’t ideal, the Raiders have listed him as a limited practice participant from Wednesday to Friday.

CB Tyler Hall, who missed last week’s game due to a back injury, is also questionable.

DT Andrew Billings missed last week’s game with a fibula injury and has been ruled out this week, as have LB Jayon Brown (hand), TE Jesper Horsted (concussion), and CB Rock Ya-Sin (knee).

According to Vincent Bonsignore of the Las Vegas Review-Journal, Jayon Brown (hand) has been ruled out of Thursday’s game against the Rams.