Rollerdrome is an action video game developed by Roll7 and published by Private Division. The game was released on August 16, 2022, for Windows PC, PlayStation 4 and PlayStation 5. Rollerdrome is a single-player third-person action shooter that seamlessly blends high-octane combat with fluid motion to create an action experience unlike any other. In this adrenaline-pumping action shooter, dominate with style in cinematic, visceral combat where kills net you health and pulling off tricks and grinds nets you ammunition. Here is our Rollerdrome review after experiencing the game for a while. 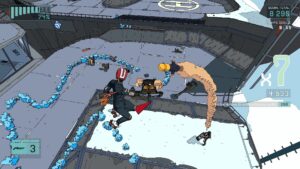 As the rookie outsider in a niche bloodsport that’s taking off in the worryingly near future of 2030, your job is to sweep through the tournament and put a villainous rival in their place. There’s some nice framing going on here. Rollerdrome transforms into a miniature narrative game between stages. You’ll have brief moments to wander around a small area – a changing room, a radio station, etc. – poking and pulling at the threads of a larger story.

In Rollerdrome, style is everything. Sometimes it resembles a playable coffee-table magazine with gorgeous full-screen color splashes on life and death. These colors, such as a tangy, mustardy yolk and rich, blood-orange red, are the kind you know a designer toiled over for hours to get just right.

The four weapons you have here are dual pistols at first, then a shotgun, a grenade launcher, and a luxurious long-range laser-crossbow that can bounce bolts off walls as you advance. Each of them is based on timing – or, more accurately, rhythm. Aiming is cleverly automatic, with a lock-on system that targets whatever enemy is closest to your reticle and in range, while the left trigger slows time and brings weapon rhythm into play. 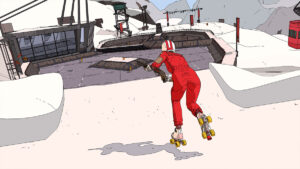 While performing tricks reloads your extremely limited single-clip ammo, killing enemies causes them to drop candy green shards of health. The flow state is already apparent, but Rollerdrome adds some straightforward but skillfully handled enemies: straightforward melee grunts with batons, shielded riot police you’ll need to stagger, mechs to target strategically, various grenades and mines to dodge – and an active dodge, too, that quickly becomes crucial. Snipers of various kinds will lock onto you with a beam of crimson red before it briefly flashes white, giving you a chance to not only shake their focus with a dodge but also to get a small damage boost if you immediately snap into a slow-motion zoom.

You’ll quickly reach the level of expertise where these types of combo survival challenge games excel: the moments when enemies cease to be obstacles and morph into opportunities. When surrounded by tougher mechs and late-game snipers, grunts provide free health. Mines fired by a defeated riot cop are a free attack that you can avoid if you trust yourself, in order to prepare for a more powerful shot from, say, that thunderbolt sniper, which can  kill a specific enemy in one shot. 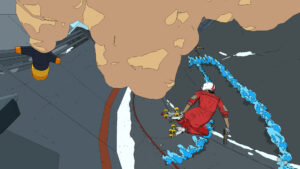 If you want to ultimately advance Rollerdrome’s campaign, you must complete up to ten objectives per stage. But really, you should do it regardless of the campaign. There are only four levels, each with about three variations, ranging from a dangerous Olympic Velodrome with half pipes to Sable’s desert bowls, a strangely dystopian shopping mall, and a glorious Bond villain ski resort. But you could play these stages indefinitely, and I will do the same. Leaderboards are not my thing, but I do enjoy myself.

And what fun, what fun. This is one of the few games that really sing to you. The small blipping noises for reloading and gaining health  to the booming pistols of Lara Croft are all parts of a system that complement and combine so exquisitely and relentlessly, with such small and simple moments of care for everything in it. In addition, no game has ever been this cool.