Since the release is still some time off, we’ll summarize everything we currently know about the 21st Valorant Agent, also known as Mage.

This will give players plenty of time to adjust to the shiny new Pearl map before another new face appears on the scene and steals their RR.

So far, we know very little about Mage, but one thing is certain: their codename, which was discovered by well-known Valorant data miner ValorLeaks. The codename is hidden in files and folders that Valorant received after the release of its most recent patch, which obviously lays the groundwork for Mage’s potential future inclusion in the game’s roster. Though this is just a codename, just like Bounty Hunter was Fade’s codename and Sprinter was Neon’s, don’t expect the Agent to be called Mage. We have no idea what kind of skills Mage may possess because it’s still very early in the countdown to Valorant Agent 21’s release. We can speculate, however, that if the theories about Mage’s Indian origin and connection to Hindu mythology are confirmed, they will likely be water-based in some way.

In any case, the codename “Mage” implies that Agent 21 will have some sort of magical prowess, possibly with the ability to cast spells that produce effects akin to smoke and/or magical hexes that render adversaries blind.

We have some lore information about Mage now that the most recent Valorant PBE has launched. If you look around Brimstone’s office and the area beneath the range, you’ll notice a reference to an individual named Varun Batra, who is a member of a new agency called REALM that we’ve never heard of before.

Varun Batra is of Indian origin, so assuming Varun Batra is Mage’s real name, the new agency is most likely from India. Given that we know there is a large Valorant community in India, and we haven’t had an Indian Agent in the game thus far, I believe this would make sense.

The folks on Valorant Update have already done some research on the name Varun Batra and discovered that there is a similar name that appears in Hindu mythology — Varuna. Varuna is the Hindu god of the oceans, which could imply that Mage possesses aquatic abilities. This corresponds to the elemental nature of other Agent abilities like fire (Phoenix), earth (Sage), and wind (Jett). Water is the only element that has yet to appear in the game. 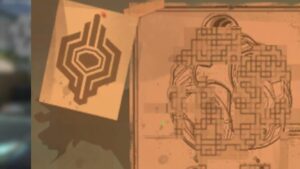 The image above depicts a symbol added to the board just opposite the range in the PBE servers, which some have speculated may be related to a Hindu symbol. Of course, this could simply be the symbol of REALM which is mentioned  earlier.

Finally, if you’re wondering about the image we used for the article’s thumbnail, it’s a player card from the latest battle pass’s Glitter skin-line. While this lady’s appearance is unlikely to be that of Mage, we believe her ethereal appearance may be a hint at Mage’s magical abilities.