A meme claiming that today, July 31, 2022, is George Jetson’s birthday has been going around online this weekend and has been for a while now, long enough to have received the Snopes treatment. In other words, the actual birthday of George Jetson, when this animated sap will first be exposed to the cruel world that will treat him, leaving him to spin endlessly on a futuristic treadmill leading to hell. It’s clear that said meme has a surface appeal: It addresses the gap between the future envisioned by speculative fiction authors and the world in which we currently live. It is a textbook update of the old “Where are the flying cars?” question. 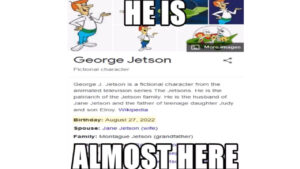 But there should, in theory, be a real answer to the question. However, The Jetsons isn’t like Terminator or Back to the Future, where we get nice, easy readouts of the dates of various futuristic events, so that presents a problem in terms of answering the question. Instead, it’s a silly cartoon that usually made an effort to hide the actual dates that its extremely bizarre vision of the future occurred.

Let’s begin by talking about the date: There is no canonical proof that George Jetson was born on July 31 as far as we know. It doesn’t appear that any episodes are set during it, it never appears to have been mentioned as a plot point in any of the show’s three seasons, and the only source ever cited for it is a fandom wiki that is simple to edit. So that part has been disproven and is unquestionably no longer funny.

Meanwhile, the 2022 part has a smidgeon of canonicity to it. As Gizmodo pointed out a few years ago, there is text implying that George Jetson is, in fact, 40 years old. (For example, in 1962’s “Test Pilot,” when told he might live to 150, George remarks that he only has 110 years to live.) 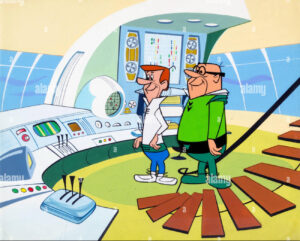 The shrug-y bit, on the other hand, places the show in time. Hanna-Barbera never gave a definitive answer about the year The Jetsons was set in, though it was frequently described as a century in the future. Many people have interpreted this to mean that the series takes place specifically in 2062, 100 years after the original debut, which would imply that George himself will be born sometime in the coming months.

But! Consider the following: The Jetsons and WWE: Robo-Wrestlemania! (in which past WWE superstars and Vince McMahon must travel back in time to defeat a resurrected Big Show after he uses an army of Wrestlebots to take over Orbit City), we are explicitly told that Big Show “has been frozen in ice for 100 years”—while George, Jane, Judy, and their boy Elroy do not appear to have aged a day. Sure, we have evidence that Jetson people live longer lives, but there’s nothing to suggest that their children don’t age at a more or less normal rate. The only conclusion we can draw from this is that The Jetsons has always been running on a Marvel Comics-style sliding timescale, and that the series always takes place 100 years in the future. That is, George Jetson could not have been born today because his birthday is always 60 years in the future from any given present. As a result, we realize that George Jetson will never be born. The poor bastard will never be able to get off this insane ride because he never got on it in the first place.

So, what did we learn? On the one hand, you should never blindly believe anything you read on the internet because it was most likely not properly cited. Thinking about The Jetsons on the internet, on the other hand, can completely kill an hour of an otherwise productive day. What could be a more glorious future than that ?