Following a recent Bloomberg report that discusses Rockstar removing some potentially offensive content from GTA 6 and introducing a new female protagonist, accusations of this game going woke are already flying.

GTA 6 Will Neither Go Woke, Nor Broke When It Arrives

What exactly is “woke” about what the Bloomberg report describes? We have the following: Once again, we find ourselves trying to parse the bizarre conservative definition of the term “woke,” which in this instance includes removing making anti-transgender or potentially racist jokes and allowing players to play as a woman for the first time in the 20-year history of the series. Okay, that’s fine.

But past that, I think you haven’t been paying much attention to the GTA series as a whole because the entire premise of the world that exists in these games is that America is a corrupt, capitalist hellhole where the American Dream only exists if you lie, cheat, and steal your way to the top. GTA as a series has allowed players to slaughter cops by the truckload since the GTA 3 days, so is it going to be used as a conservative talking point now that GTA 6 is “anti-cop” if that tradition continues?

You can twist anything to fit your story, and suddenly the police murder simulator set inside a decayed parody of America is woke because…you can play as a woman and they won’t make transphobic jokes. Okay. 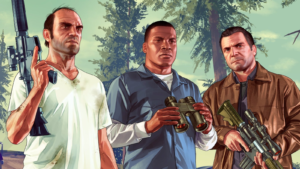 In terms of “going broke”?  At this point, there is literally nothing Rockstar could do to make GTA 6 anything less than a smash hit. GTA 5 has sold 165 million copies, far exceeding any traditionally priced game, with the closest comparable being perhaps Mario Kart 8, as that wasn’t a low-cost title like Minecraft or Tetris, nor an always-bundled game like Wii Sports or Super Mario Bros.

The point is, even if lightning does not strike twice, GTA will sell at least 50 million copies. 75 million? And that’s conservative, because based on the previous game’s performance, 100 million copies seems like practically a guarantee. You could have GTA 6 star Alexandra Ocasio-Cortez, and there aren’t enough offended conservatives in the world to make it anything less than a smash hit.

You will hear this “woke” narrative more and more as new information about GTA 6 and its new characters, setting, and storyline becomes available. And yet, I guarantee you that, aside from fewer lame jokes, very little will change about the game itself, and it will still destroy everything in its path when it does arrive.

Rockstar Games hasn’t even confirmed that GTA 6 is set in Vice City, but fans are well on their way to creating a map in the meantime. London police arrest teen hacking suspect, haven’t confirmed […]

Is there a campaign or a story behind Bonelab?

BONELAB is a virtual reality game that Stress Level Zero is developing and publishing. It was created with the Unity engine and the in-house 1Marrow Interaction Engine, and it supports SteamVR, Oculus Desktop VR, and […]

While Rockstar has been working hard to remove any early gameplay from the internet, GTA 6 fans have been busy piecing together a map and attempting to figure out game protagonist actors based on recent […]