With the release of Destiny 2’s Season of the Plunder, each class received a new exotic armor piece. We’ve also seen the release of Arc 3.0 and more exotic weapons. Several exotics and weapons have been disabled throughout the season, as is customary for Destiny 2. Gyrfalcon’s Hauberk, the new Hunter exoctic, is one of these. 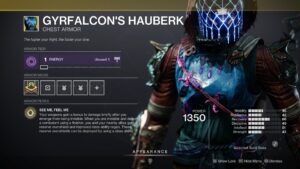 Its first perk increases your weapon damage (35% in PvE, 15% in PvP) for a short period of time after you exit invisibility. In comparison, the damage increase in PvE is greater than that of the Well of Radiance, albeit for a much shorter duration. Hunter is the ideal class to use this perk because it has multiple ways of becoming invisible.

When you use a finisher while invisible on a target, you and nearby allies gain a reserve overshield and a boost in class ability regeneration. When combined with the fragment, echo of obscurity, you will be invisible for an extended period of time. The perk boosts your and your teammates’ tankiness in Destiny’s PvE sandbox. The exotic has been disabled due to this perk.

The new exotic’s hidden perk is that your finisher makes all enemies around the target you finished to become volatile, resulting in some nasty chain explosions. If you have stylish execution, you can use these volatile enemies to become invisible once more.

Titans wielding the Lorely Splendor Helm or Juggernaut will become virtually invincible. Because both consume the class ability with full class energy to activate their perks, Loreley creating a sunspot for healing and Juggernaut creating a frontal shield to block damage, it does not count as the titan barricade being cast, allowing the titan to keep their reserve overshield and increased class ability regeneration. As you might expect, this makes titans virtually unkillable, though Loreley’s nerf last week makes solar titans weaker.

Unfortunately, a different class reaping too many benefits from a hunter exotic disables it for hunters to use, especially those engaged in solo-based activities. With Master King’s Fall and Grandmaster Nightfalls on the horizon, it makes sense to keep unkillable titans at bay. Still, one can hope that when the higher-tier content arrives, hunters will have access to the exotic.

With such a large roster of playable fighters in JoJo’s Bizarre Adventure: All Star Battle R, you’ll naturally want to know who performs the best. We’re here to help, and we’ve ranked the characters from […]

Where Is Xur today? Destiny 2 Location today (September 23) This week you can find Xur in the EDZ, in the Winding Cove area. For his weapon, Xur is offering Vigilance Wing. Hunters can pick […]

Bungie released Destiny 2 Hotfix 6.2.0.2 and accompanying patch notes on September 1, 2022. There are a number of notable fixes, including fixing King’s Fall raid crashes and fixing issues with Heavy Grenade Launchers. Where […]