The Warzone Pacific meta changed dramatically after the Season 4 Reloaded update introduced a slew of weapon balancing changes, and players are now looking for the best guns to use. IceManIsaac, a Call of Duty pro, was examining the new medium-range meta and then revealed the best Vanguard Assault Rifle players should try out after dropping into a COD Warzone Pacific game. 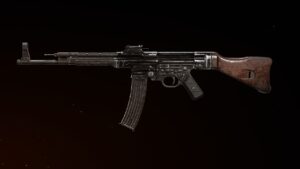 Following the meta change, we can clearly see that the STG44 Assault Rifle is now being used in tournament loadouts by many professional players. The STG44 Assault Rifle, according to IceManIsaac, is an “old meta that has returned with a vengeance.” He praised the weapon recoil, TTK, and movement speed, which make it ideal for quickly dispatching enemies in medium-range engagements. IceManIsaac then revealed the best loadout for the weapon.

The Hatched Grip, M1941 Hand Stop, Nerves of Steel and VDD 34S Weighted are the main components of IceManIsaac’s loadout, which is designed to control the STG44’s recoil. Once the weapon is more accurate, we can use the SVT-40 PU Scope 3-6x to eliminate enemies at a distance.

The 7.62 Gorenko 50 Round Mags will provide you with enough enemies to eliminate them all. The Lengthened ammo type increases bullet velocity, allowing you to quickly shred through your enemies. Finally, Fully Loaded ensures that you have the maximum amount of ammo.

With these attachments installed, the STG44 will enable you to deliver some serious pain in a hurry. So, if you drop into Caldera, Fortune’s Keep, or Rebirth Island, make sure to try this loadout.

The developers at Vanguard Sledgehammer Games continue to update the game and bring players new content. Players will no longer have to deal with DEV ERROR 10308 that occurred on the USS Texas map. Are […]

What is the BP50 Assault Rifle ? The BP50 is one of two weapons not featured in the Season 5 battle pass, which means the unlock requirements are a bit more complicated. When is The […]

Season 5 of Vanguard Zombies was supposed to bring a new round-based zombies map, but instead it brought a remaster of Terra Maledicta – The Archon. Full-auto Pistol loadout in Warzone Season 4 Reloaded Do […]