Vahn’s Quest is a role-playing (RPG) and strategy mobile game developed by Super Planet. There are many different heroes in Vahn’s Quest, and each one is distinct. They come with various skills, stats, counters, buffs, and so on. Finding the best heroes to begin your journey is never easy because some heroes outperform all others. Furthermore, upgrading your hero is difficult, and you do not want to waste your time and resources on ineffective heroes. To help you with this, we’ve put together a Vahn’s Quest Hero Tier List of the best heroes you can add to your party in the current patch. 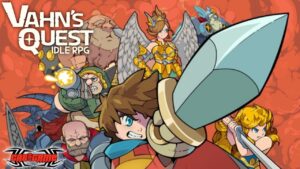 As can be seen, all Heroes in the S Tier are 5-star. The majority of them are in the S Tier because every single Hero in that tier has a very powerful ability. In addition, their base stats are insane. For example, Bruta is a tank with 3400 base health. As a result, he is one of the best tanks in the game. He also boosts the entire team’s attack for 6 seconds, making him even more incredible.

The majority of the 3-star heroes in this game are weak. Despite this, some of them are suitable for newer players, at least until some good 4-star replacements become available. However, some of the 4-stars are also extremely weak. Kuno is the best example of this. Despite being a 4-star melee fighter, Kuno has only 600 Health and 200 damage, making him a squishy target. Another example is Pullum. He is a tank with a high starting health, but his ability only benefits him and does little for the team. As a result, most mediocre characters are far worse than their counterparts for the time being. One of the best Heroes in the game is Alcapa, who has the ability to increase everyone’s crit chances and base crit damage. Even though Vahn is a 5-star, some may wonder why he is in the A Tier. This is due to the fact that his ability is insufficiently impactful/helpful, his Sword Fire ability does not deal enough damage on its own and only targets one target. However, he is still a top – tier heroes and can deal decent enough damage.

Because the 5-star Heroes are the most powerful, new players will find it difficult to advance their 3 and 4-star Heroes to that level. Hopefully, the developers will take a look at the 3-star and 4-star Heroes in future patches and buff them accordingly. Until then, it is recommended that you run your best 3 and 4-stars. A tank and a melee fighter should be at the front of the team, with two ranged characters at the back, typically a DPS and a support unit.

In this Tales Noir Partner Tier List, we will list the best Partners to use in battles, regardless of the type of content (PvE or PvP). Remember that this tier list should only be used […]