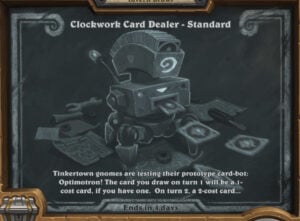 This weekly event works by having players create a Standard Deck and then drawing a card that costs the same as the turn number each turn. This Tavern Brawl can ensure that they draw the exact card they want each turn. Once you’ve found the cards you want to draw on turns 1 to 10, make sure you don’t include any other cards of the same cost. To avoid interfering with your dream curve, fill the deck with duplicate cards or 0-cost / +10-cost cards like whisps and giants.

The Far Watch Post is the star of Hearthstone tavern brawl ; if you play it on curve, the Clockwork Card Dealer effect will simply paralyze your opponent. Make sure you are ready for it!

As previously stated, you will always draw the card you want, so don’t worry about including card draw in your deck. Furthermore, keep in mind that card advantage is meaningless; the most important factor is tempo.

All of the decks listed below can be customized to fit your collection. Remember that you can win this week’s Hearthstone Tavern Brawl by simply building a tempo version of any aggro deck. If you don’t have any legendaries, just replace them with the strongest minion you can find.

Furthermore, many current Standard decks, such as Aggro Druid and Relic Demon Hunter, will most likely do well enough. You might be able to curate them to ensure draws, but nothing more is needed.

That brings us to the end of our article. I hope you have fun with this week’s Hearthstone Tavern Brawl.