This coming weekend sees the start of game week 11 in the NFL, some people might say this is the start of the home stretch. There will be mixed feelings all across the NFL, from teams who are nowhere near where they expected to be like the Rams. From teams who are exceeding expectations like the Eagles, and then from teams like the Bills who just CAN’T QUITE get things to click the way they know they can. While they have been favorites to win the Super Bowl almost all season, they’re sorta struggling at 6-3 right now, unable to kick on with any real venom.

Today we’ll be looking at one conference in particular and one specific division within that conference. The North division within the American Football Conference. Even more specifically, we will be looking at the Baltimore Ravens. The Ravens find themselves sitting at the top of the AFC North right now with a 6-3 record, but they are currently going from strength to strength and look like they should be clear winners of the division, but how comfortably can they win it? 2 games, 3 games? Perhaps even more? That’s what we’re here to discuss today!

Currently top of the Division with a couple of “easy” games coming up, how far ahead could the Ravens be after Thanksgiving weekend? Source: Google Sports Info

For the Ravens to win the division comfortably, they need the fixtures to line up properly. They need to play the right teams while their competition play the wrong teams, you know, the teams that are flying, the teams that are still fighting for playoff places, or even underdogs with a point to prove. So taking a look at the division, how are the next 3 games for all of the teams involved?

Starting with the Bengals, the Steelers game will be an interesting one, given the Steelers aren’t anywhere near where they want to be right now. The Bengals are favourite in their next 2 games but that won’t be the same for their game against the Chiefs unless the Chiefs implode in the coming weeks, so probably 2-1. Then for the Browns, they’re obviously underdogs against the Bills, but they’re underdogs against the Bucs before they’re almost certainly going to be favorites vs the Texans, so to me, they’ll go 1-2 here.

For the Steelers however, they have some very tight games coming up, as I said they’re underdogs vs the Bengals, the Colts & Falcons games will be tight. Statistically they’re underdogs against the Colts which likely means they’ll be underdogs vs the Falcons too but anything can happen in the coming weeks, I honestly think the steelers only win 1 game however seeing them be 1-2 over the next 3 game weeks. If the Ravens win all 3 games here, they go top of their group by 4 games with only 5 game weeks remaining, so it’s very possible a 3 game lead may end up being more by the time the post season rolls around!

So, for the Ravens to win their division, they need to keep up their 3 game winning streak don’t they? It’s time to take a look at the odds for a couple of their upcoming games and see how the experts think these are going to play off, starting off with this weekend as the Ravens host the Carolina Panthers at the M&T Bank Arena in game week 11, as mentioned the Ravens are 6-3 with the Panthers 3-7, so it’s obvious here that the Ravens will be favourites, but the question is, how heavy are the odds?

Well, checking out the odds across the board, we’ve settled on BetRivers Sportsbook in Maryland and at the time of writing, the Ravens are -750 favorites, that will see you earn $5.66 from a $5 stake, for odds like this it always seems like they’re just made to be added into parlays, if you think the Panthers can do it however, you can get them right now at +525, coming off the back of a 25-15 win over the Falcons that could be a good shout, a $5 stake here will return $31.25, not too shabby.

Since the odds are up and live, we might as well take a look at the next fixture, which is of course thanksgiving weekend. For thanksgiving, the Ravens travel to Florida to take on the Jacksonville Jaguars, the Jaguars also find themselves currently sitting 3-7 but with a bye this week, they’ll be going into thanksgiving weekend rested, perhaps too rested and full of turkey? ANYWAY, again the Ravens are favorites here, a bit tighter however, -210 here will see you get a $7.38 return from $5. While a $5 stake on the underdogs gets you $13.75. 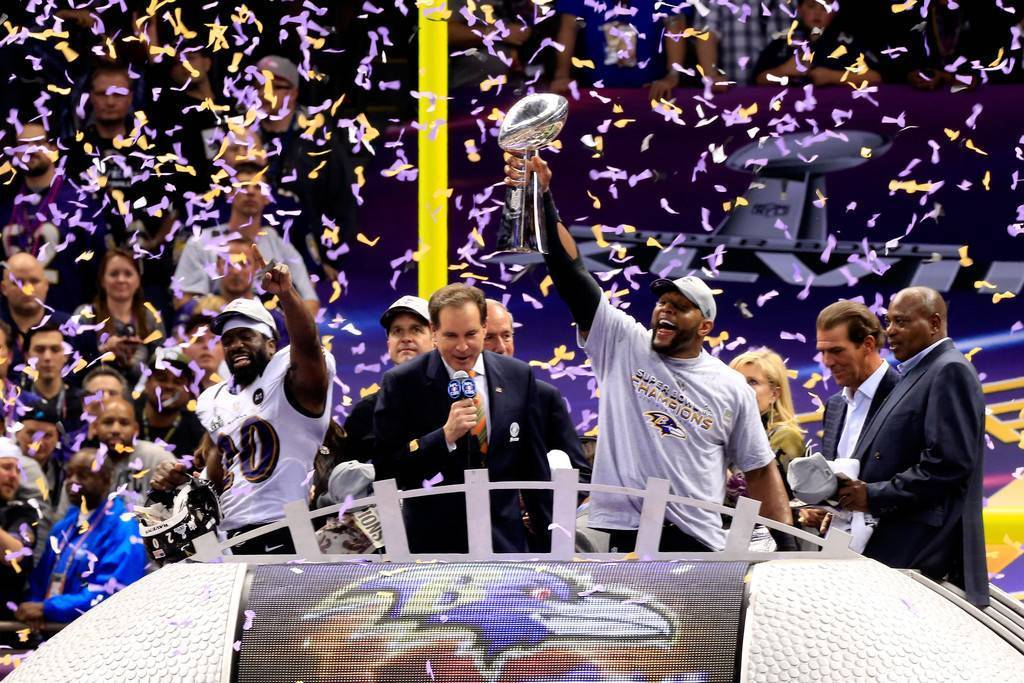 If the Ravens are out well ahead in the division by the end of the season, will they take the foot off the gas a little to prepare for the playoffs? Source: Bleacher Report

So Ravens fans, how are we feeling? Do you agree with the sentiment here? Will it be a comfortable division win for you this season? Who do you think have been your best performers this season? What about your unsung heroes? Let’s give some recognition to those who deserve it here, eh? Then there’s the obvious question of, if they win the division, what are the chances they go all the way?

Speaking of going all the way, we’re only THREE months away from Super Bowl LVII now, which will be held in the State Farm Stadium in Glendale, Arizona on February 12th 2023. Realistically, who do we think is going to be in the final? Are the Bills still the favorite to win the whole thing like they have been since before the season even started? Or do we think the Eagles will carry their momentum into the postseason? Or will another team rise to the occasion and catch everybody off guard? I mean, crazier things have happened in sport, right?