Without a doubt, one of the most challenging items to acquire in No Man’s Sky is Salvaged Frigate Modules.They’re used to upgrade your capital ship, and you’ll need a lot of them to finish the full set of upgrades. So, while we’ve got your attention, let’s take a look at the best way to farm NMS Salvaged Frigate modules in 2022!

This method has several advantages. The first is that the drop rate for these missions isn’t actually a drop rate. When you select a bounty, the rewards are guaranteed and visible to you. In this case, “drop rate” simply means “are any of the bounties giving you what you want?” Frequently, the answer is no. This means either waiting for new missions to refresh or traveling to a different system to get a new batch. Another advantage is that you can run multiple missions at the same time. In many cases, you may be able to complete these missions while doing something else.

You can find said NPC on every standard space station. Some of their missions will require you to rise through the ranks of the system’s dominant faction. Fortunately, these missions also grant standing, so you can’t really lose!

These outlaw missions are essentially a hybrid of “normal” station quests and Nexus quests. You can only accept one at a time. However, you obtain them from outlaw stations in outlaw systems. 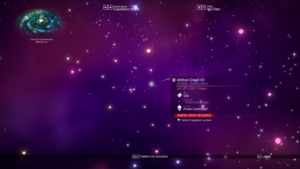 You can just explore at random to find such systems. Alternatively, you can use a Conflict Scanner. When you hover over any outlaw system, a small skull icon will appear on the Galaxy Map. An Economy Scanner can also be used to detect a “black market” in outlaw systems.

Nexus missions work in the same way that station missions do. The main differences are that Nexus missions are multiplayer affairs that can only be accepted one at a time.

Go to the Space Anomaly to find your Nexus missions. The Nexus is the massive, robotic eye machine encased in a cube in the center of the starting area. “Speak” to it to see a list of the missions that are currently available. Take a look at the top row of quests in particular, each of these quests will grant a random item. This item can be a wide variety of things. 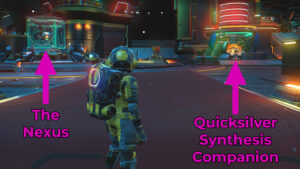 Every 10 minutes or so, the exact reward — and the goal of your mission — is rotated out. So, theoretically, you could hang out on the Space Anomaly and check the Nexus every few minutes to see if the top row of quests is awarding a Salvaged Frigate Module. And, similarly to station missions, the reward is a predetermined guarantee at the start.

The best way to ensure a drop of a salvaged frigate module is through freighter piracy. Unfortunately, it was nerfed a few months ago. Attacking NPC freighters now has a shockingly low drop chance. Even so, luck can still strike occasionally.

Finding freighters is as simple as it gets. Simply float around in space. Freighters are frequently seen right next to space stations. If you don’t see one, try boosting forward for a few seconds. If that doesn’t work, restart your Pulse Engine and try again. When you come across a freighter, just shoot the exposed cargo pods. They’re all labeled and feature circular health bars, similar to minerals and/or Sentinel loot canisters. 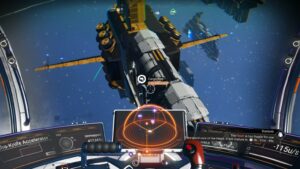 It’s worth noting that the chances of receiving a module are extremely slim. Every cargo pod, however, has a small chance of dropping one. Even today, this makes piracy quite efficient in the sense that you have a lot of chances in a very short window. If your starship can withstand the heat.

This is the absolute worst way to farm Salvaged Frigate Modules. We’re putting it here for posterity’s sake.

The best way to locate a crashed freighter is to purchase a Planetary Chart (Emergency Cartographic Data) from any space station’s Cartographer. This NPC is always standing right next to the teleporter.

Once you have a chart or three, use them from your inventory. Each one has a chance of leading to a downed freighter. You just have to keep buying charts and checking their objective markers until you strike gold. On the plus side, you’re almost certain to get some crashed freighter coordinates that way.

Through your Analysis Visor, you can see buried caches all over the freighter site. To open these containers, a common element, such as Cobalt, will be needed. You will receive some sort of reward for doing so. In some cases, this might be a Salvaged Frigate Module.

This is another good project for the backburner. Fleet Expeditions are the real-time missions that your freighter sends frigates on. This method doesn’t require you to be logged into NMS.

Speak to your Navigator NPC by the circular, central console on your freighter’s command bridge. They’ll give you a list of five missions to complete with your frigates.  Once a fleet has completed its mission, you can access the Fleet Expedition rewards from the same Fleet Command Station, once the real-world timer has expired. 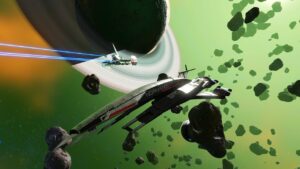 Different missions have various icons. We’re looking for the ones with pickaxe symbols. Some of these missions are classified as “Constructed Technology.” These expeditions will be rewarded with Salvaged Frigate Modules. The rub is that the frigate quests you receive from your Navigator are completely random… again.

Still! In any case, Fleet Expeditions are a great source of other resources and money. They’re essentially free to complete, so run as many as you want. 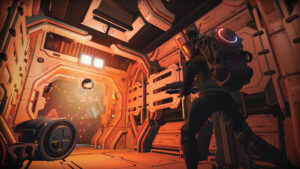 The basic idea is the same as with piracy. Drop rates are low, as they are throughout the world, but they are concentrated. The upgrade item can be found in the blue containers that are scattered around each derelict. You have dozens of chances to get what you need quickly because there are so many of these suckers in one place. Derelict Freighters, like piracy, provide a wealth of other benefits. Specifically, Tainted Metal. This is a one-of-a-kind resource found only in this environment. You can also make some pretty good stuff out of it.

The only disadvantage is the cost. It is possible to come across a derelict freighter in the wild. You can purchase an Emergency Broadcast Receiver to ensure one. However, these are reasonably priced and increase in price as the quantity purchased increases.