Marvel’s Avengers Hawkeye Captain America: Civil War Outfit is the next Specialty Item you can earn through Shipments after the reset on 18 August 2022!

Onscreen and in print, Marvel superheroes are renowned for wearing a variety of outfits throughout their lives. When Hawkeye was transformed for the big screen, he received a costume that… hardly at all resembled Hawkeye. He obviously has the bow and arrow, but he is missing his purple outfit, theatrical mask, and armor. When he first appeared in Thor and The Avengers, it was replaced with a more generic black costume, but as the series has continued, it has attempted to incorporate more of his comic costume into live action. 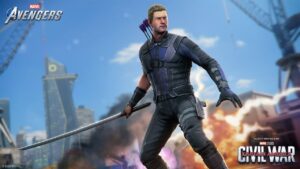 Hawkeye’s “Marvel Studios’ Captain America: Civil War” Outfit is the next specialty item you can earn through Shipments after the reset on 18 August 2022. They can be purchased for 500 units, making them a better value when compared to the fee to obtain the currency required to purchase these types of skins.

However, there is no guarantee that you will receive Hawkeye from these shipments because they are somewhat random, but it’s better than paying nearly $15 for enough in-game currency to purchase the character if you’ve already been grinding for other cosmetic rewards.

As of now, the future of Marvel’s Avengers is uncertain; fans are hoping for more expansions, but nothing concrete has been announced. More heroes are expected to join the game, though it appears that they will not introduce a major new storyline like Black Panther did. Of course, anything can happen, but it appears that major new content additions to Marvel’s Avengers are winding down.