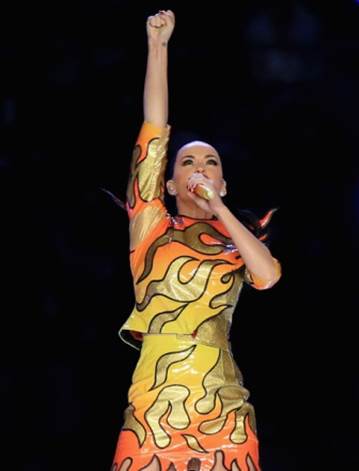 American fashion designer Jeremy Scott recently dressed singer Katy Perry in four unique outfits for her hugely successful Super Bowl half time performance and now he has commented on how they managed to make the quick outfit changes work in the short 12-minute performance. Jeremy reveals that they began by dressing her like a “Russian nesting doll” and it was all about working out how to layer everything:

”Making it manageable to get her into four looks in about 10 minutes without her ever leaving the stage has been the trickiest part. The concept is kind of like a Russian nesting doll where you have things on top of things, and then you put something else on before you take something else off. It’s been more of a math and science lesson about layering, how to hide and to have her have big reveals.” 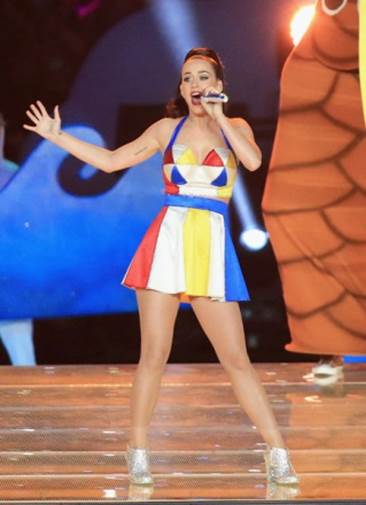 Jeremy thinks changing outfits as much as Katy did has never been done before, and he was amazed that the singer was able to pull off the whole performance so flawlessly: ”I don’t think anyone has taken on four costume changes for a Super Bowl performance ever. I really have to give it to Katy for rising to the occasion. We were originally only going to do three and I actually encouraged her to do a fourth.”

The designer adds that before Katy achieved her huge fame, she approached Jeremy and told him how much she loves his clothes and that it was her dream to be able to wear his pieces:

”Before her first album came out, she came up to me at an event in LA and told me that I was her favourite designer. She said that she was a singer and that one day she was going to have an album out, and she hoped that one day she would be able to wear my clothes. She’s more than achieved one of her dreams. That was one of her dreams. We’ve been doing things together ever since. So we’ve had a wonderful joyful friendship and creative partnership.”