The Genshin Impact Mona’s Astral Puzzles are a set of four puzzles found as part of the Ancient Azure Stars quest, which features Mona. Each puzzle consists of a constellation and a collection of grounded light devices that emit a beam of light in one direction when struck. In this guide, we’ll show you how to solve it.

To participate in the Summertime Odyssey events, you must meet the following requirements:

If you haven’t completed Mona’s story quest, you can still enter the event by clicking the ‘quick start’ button on the event page.

How To Solve The Genshin Impact Astral Puzzles

There are four Astral Puzzles to solve in total. Check out this video if you’d prefer a more visual explanation. In the first puzzle, you only need to look up at the sky to recognize the pattern. The answer is fairly obvious; three light devices are arranged in a triangle in the center; simply connect one to the next in a loop-like line. The two devices outside should then point at the closest device, with the device in the back pointing to the device across the room from it.

You will need to move around in order to get a clear picture because the constellation can only be seen through a broken roof. The pattern is essentially a large triangle with a top-to-bottom line. When facing the devices from the entrance, the triangle’s top device should be pointed at by the leftmost corner, which is pointed at by the rightmost corner. 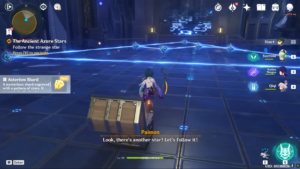 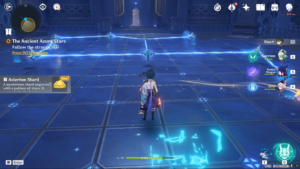 Beyond the water room, there is an invisible wall that conceals the solution to this puzzle. There are a few different approaches that are effective, and the pattern resembles a runner taking a long stride. 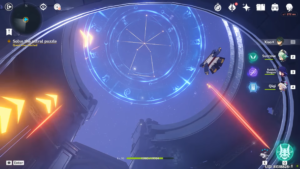 Similar to the first puzzle, the solution to this one can be found in the sky, but in order to see it, you must press the switch in the center of the room. It’s easier than it seems to point the five people in the group’s rear toward the device in the middle while facing the devices from the room’s entrance side. The rest of the pattern is formed by pointing each device to the next one in line, to form a loop. The final shape should have five sides and five lines pointing to the pentagon’s tip, resembling a tall tent with a pointed roof.

That’s everything you need to know about the Astral Puzzles in Genshin Impact.

As part of the game’s significant Version 3.0 update, Genshin Impact recently unveiled a brand-new teaser for Sumeru, the country that will be included in the game. While previous Sumeru teasers have primarily focused on […]