It’s finally Saturday, which can only mean one thing: BitLife’s latest weekly challenge has been released. Beginning on October 15, you must become a famous actor who wins a Bitcademy Award! , This challenge will require some effort on your part, as fame does not come easily. If you want to learn more, keep reading to find out how to complete the BitLife Rising Star Challenge.

How to Complete the Rising Star Challenge in BitLife

The following are the four tasks you must complete to complete the challenge: 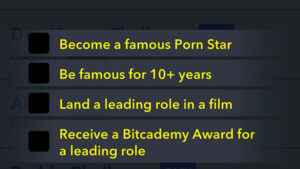 Before beginning this challenge, keep in mind that you’ll need the Acting special career pack to unlock film roles and award nominations. It costs real money and can be purchased individually or as part of the Boss pack, which grants access to all current and future job packs.

Once you’ve officially become an adult actor, just keep doing what you’ve been doing and make sure your fame level stays the same or increases. To make things easier, increase your weekly work hours to around 50 or higher. After a few years, you will become famous! Maintain this fame for at least ten years to complete both tasks.

Your Actor job pack will be activated from this point forward. To get a foothold in the acting industry, go to the Special Career tab and audition for Extra and official movie roles. Concentrate on auditioning for movie roles with the tag “Lead Role” next to them. As you appear in more films, your chances of being nominated for a Bitcademy Award increase. To complete the challenge, you must win this award at least once while playing the lead role in a film. Just don’t confuse it with a “Bitty” Award!

That is how you complete the Bitlife Rising Star Challenge.