Phillip Schofield and Holly Willoughby have a trouble that related to the Queen queue-jumping. There are many suggestions that they should be sacked. And Eamonn Holmes has a cryptic response. 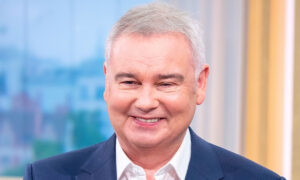 Thousands of people waited in line for hours to pay their respects to Queen Elizabeth II at Westminster Hall in London. So, the This Morning hosts were questioned after allegedly skipping the line for the Queen’s lying-in-state.

After widespread criticism, the couple released a declaration on Tuesday’s ITV show. They explained to viewers that they were there in a “professional capacity” and did not take anyone’s place in the line.

There was a suggestion that Holly and Schofield should be sacked and Eamonn has replied that.

“I always preferred @EamonnHolmes and @RuthieeL #ThisMorning.” Another user replied to the tweet, posting: “They should be sacked Eamonn and Ruth are far better”. One of support comment on Twitter. He replied to the thread with a three praying hands emoji. “Ha ha… nice one,” he said in another comment.

The Liverpool Echo has published a response from former This Morning presenter Eamonn Holmes to suggestions that he and his wife, Loose Women’s Ruth Langsford, take their positions. And Eamonn talked about scandal on his breakfast program.

Isabel Webster, his co-host, mentioned that they had a special guest on the way “”suffered” the long line to see the Queen, adding that they were “not of any inconsequential age,” to which Eamonn responded, “What? Phillip and Holly? Are we addressing them?”