In this article, we’ll go over the best Faruzan build theories for Genshin Impact, including weapons, artifacts, and talent Focus.

Faruzan will benefit from Noblesse Oblige as a support; at two pieces, it increases her Elemental Burst damage by 20%, and at four pieces, it increases the attack percentage of everyone in the party after she uses her Elemental Burst. The Emblem of the Severed Fate might also help this character. Faruzan needs a lot of Energy Recharge to maintain her Bursts for the main DPS, but with this set, you can also deal damage based on how much Energy Recharge she has accumulated. At two pieces, the set will boost Faruzan’s energy regeneration by 20%, and at four pieces, her elemental burst will deal damage equal to 25% of her total energy regeneration, up to a maximum of 75% more damage.

Faruzan’s primary stats will change depending on which combination you’ve chosen to concentrate on. The best settings for Faruzan’s Sands, her Goblet, and her Crown on a mixed set of Anemo damage and boosted Attack are respectively Attack Percentage, Anemo Damage Bonus, and either Crit Rate or Crit Damage. If you’re built like a DPS, you should prioritize Attack, Crit Rate, and Crit Damage. 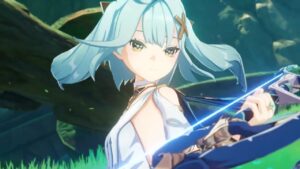 If you’re looking for a more support build, we recommend Energy Recharge on all of her artifacts, along with an Anemo Damage Bonus for her Goblet. You should prioritize Energy Recharge, Elemental Mastery, and Attack as sub-stats. You should keep your Crit ratio at 1:2 as usual to ensure that you are doing consistent damage for Faruzan’s attacks, Skill, and Burst. If you’re going to use Emblem of the Severed Fate, this support build is perhaps the most important to stick to because it only increases Faruzan’s Burst damage by building into her Energy Recharge. It will only help your team’s output of Skills and Bursts by consistently rotating energy points, especially as you progress with some of Faruzan’s constellations.

Faruzan’s weapon build, like Bennet’s, will prioritize a high base attack. Elegy of the End is the most popular Five-star weapon for this purpose, as it increases Elemental Mastery and Attack. Skyward Harp would be the best choice for her Base Attack because it outperforms all other bows at 674. But, unless you’re willing to take Skyward Harp away from your DPS, here’s a list of weapons that have a high base attack and are four-star.

Weapons at 565 Base Attack:

However, not all of these weapons are easily accessible to players. Fading Twilight has to be the best option on this list. With a high base attack and Energy Recharge as its main stat, this bow can increase damage by 12%, 20%, or 28% at its highest refinement by switching between the three stats on attacks that hit enemies. This weapon was available for a limited time during the Perilous Trail event, and its refinement material was available for players to fully refine it. Weapons at 510 Base Attack:

These weapons are very simple to obtain. At the Sumeru Fishing Association, you can trade fish for Each Of The Line. You can also exchange your catches for refinement material to increase the effects.  Windblume Ode is an unusual weapon that was available for a limited time as a free-to-play bow for Venti and had refinement material available in the shop. These weapons would be ideal for Faruzan due to the combination of Elemental Mastery and attack boosts or Elemental Skill and Bursts.

Your top priority should be to boost Faruzan’s burst, followed closely by her skill. Her Burst will make both Anemo Boost and Anemo Resistance more damaging, making those two buffs more valuable than her Skill. And, she could be a good stand-in because she can keep characters like the Wanderer, who can use ranged attacks to attack, out of the way of enemies. However, it can be challenging to get enemies close enough so that you can effectively damage them all.