The 47-year-old mother of six, who has six children with ex-husband Brad Pitt, paused to pose for photos with stunned fans. The always-elegant actress wore a black gown with a camel-colored coat tied around her waist. She wore her long brunette hair straight with a side part and aviator sunglasses with a light tint. Zahara wore faded light wash jeans and a white blouse with a peplum hemline, looking proud to have her mother by her side.

The first-year college student wore large hoop earrings and tucked her curly hair behind her ears.

A man with the Twitter handle @BlackrThaBerry was also able to take a selfie with the star while remaining discreet.

He wrote in his tweet, ‘“Look I know you’re tryna be inconspicuous, so when we take this selfie just look down instead of me holding the camera up. Cool?”

Another user reflected in a tweet, ‘I really met Angelina Jolie. The original bad b****. And she’s FLAWLESS in person. My day is complete, thanks Spelhouse.’ 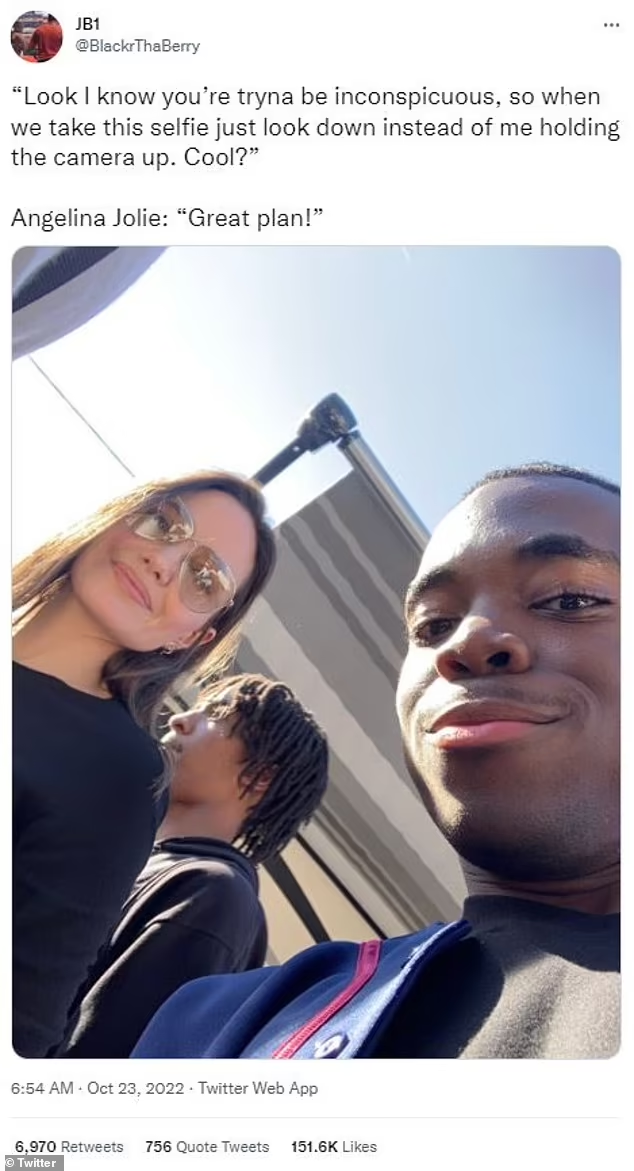 Back in July, Jolie announced on Instagram that Zahara would be attending the historically Black college. She captioned a photo of Zahara with a few of her new classmates: “Zahara with her Spelman sisters! Congratulations to all new students starting this year. A very special place and an honor to have a family member as a new Spelman girl.”

Jolie then cried as she dropped her daughter off at the Atlanta campus in August. In a video shared by the school’s Vice President of Student Affairs, Darryl Holloman, the Maleficent actress said, ‘I’m gonna start crying … I have not started crying yet,’ adding that she was ‘holding it together.’

Angelina adopted Zahara from an Ethiopian orphanage in 2005, and Brad, 58, later adopted her as well.