With teams returning to practice ahead of games on Sunday and Monday, we will keep you updated on the latest injuries to Christian McCaffrey, Josh Jacobs, PJ Walke and David Njoku. 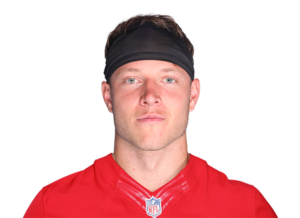 UPDATE (Dec. 17): In the 49ers’ 21-13 win over the Seahawks on Thursday night, McCaffrey rushed 26 times for 108 yards and a touchdown while catching six of eight targets for 30 yards.

UPDATE 1: McCaffrey (knee) is listed as questionable for Sunday’s game against the Buccaneers, according to Matt Maiocco of NBC Sports Bay Area.

UPDATE: According to Eric Branch of the San Francisco Chronicle, McCaffrey was limited in practice Wednesday due to a knee injury.

Ahead of practice on Wednesday, San Francisco 49ers head coach Kyle Shanahan told reporters that McCaffrey would not participate in practice.

McCaffrey was seen wearing his jersey in the locker room, indicating he would likely be taking part in the walkthrough.

That is usually a good sign for a player’s status looking ahead to Sunday. As expected, the 49ers appear to be managing the load on McCaffrey’s knee, and that means little to no practice time.

UPDATE (Dec. 17): Jacobs (quad/hand) is listed as questionable for Sunday’s game against the Patriots after only limited practice this week, according to Rachel Gossen of the Raiders’ official website.

UPDATE 1: According to Ian Rapoport of NFL Network, Josh Jacobs will undergo tests after injuring his pinkie finger in Thursday’s 17-16 loss to the Rams.

UPDATE: According to Anthony Galaviz of The Fresno Bee, Jacobs (quadriceps) is listed as questionable for Thursday’s game against the Rams.

Last week, Josh Jacobs was added to the injury report due to a calf injury. He shrugged it off, however, to produce an incredible 303 yards from scrimmage, including a huge 86-yard walk-off touchdown on Sunday.

According to NFL Network’s Tom Pelissero, Jacobs will not practice much this week, if at all, as the Raiders deal with the injury.

With the Raiders having a late-afternoon kickoff in Week 13, this is a problem for fantasy managers. Jacobs just demonstrated why he is impossible to bench if active, but fantasy managers may be forced to make a difficult decision if they do not have insurance in that late window.

UPDATE (Dec. 17): Walker (ankle) is expected to play against the Seahawks in Week 14, according to Darin Gantt of the Panthers’ official website.

UPDATE 3: Walker (ankle) is expected to play against the Seahawks in Week 14, according to Darin Gantt of the Panthers’ official website.

UPDATE: Sam Darnold has been named the Panthers’ starting quarterback for Week 12.

Baker Mayfield took over at quarterback for the Panthers in Week 11 while PJ Walker was out with an ankle sprain, and boy, was he bad.

We don’t know what path the Panthers will take at quarterback, but according to head coach Steve Wilks, we’ll learn more about Walker’s status during Wednesday’s practice.

We’ll know how Walker’s week off has helped his ankle at that point.

UPDATE (Dec. 17): Njoku (knee) is listed as questionable for Saturday’s game against the Ravens, according to Zac Jackson of The Athletic.

UPDATE: According to Scott Petrak of the Elyria Chronicle-Telegram, Njoku (knee) participated in limited practice on Wednesday.

Given that he played 67 snaps and had nine targets in Week 14, Njoku should be ready for a three-down workload when the Browns face the Ravens on Saturday.