As he is in The Patient, Steve Carell is nothing like you’ve ever seen. He leads FX’s compelling limited series with his best dramatic performance to date, a sublime and crushing performance that stays with you long after the finale’s credits have rolled. It transcends the memory of Michael Scott from The Office and his dramatic performances in Beautiful Boy and Foxcatcher on the big screen. After the underwhelming Space Force and a poorly written character on The Morning Show, it’s satisfying to watch Carell deftly guide a suspenseful and captivating TV show.

Dr. Alan Strauss, played by Steve Carell, is kidnapped by a patient named Gene, who is quickly revealed to be Sam Fortner, a.k.a. the John Doe Killer. Sam is unable to openly discuss his criminal activities during regular sessions, so he kidnaps Alan and shackles him in his house’s tiny, sparsely furnished basement. The hope is that Alan can be cured of his homicidal tendencies, even if it takes years and years of therapy. Chained to the wall with one leg, Karel uses the small space to his advantage to express fear, anxiety, sadness, and loneliness while forcefully treating Sam. While The Patient doesn’t have the same scope, emotional weight, or amount of time as  series, it is still a valuable examination of Alan and Sam’s internal struggles and more fundamental conflicts. While one is a deranged psychopath seeking magical redemption, the other has all the time in the world to deal with his tragic past. The program also looks into how, despite having utterly different worldviews, they both find meaning in their complicated father-son relationships, as Alan says. 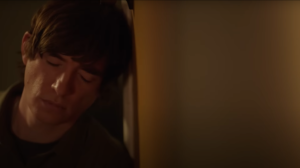 Alan is in a vulnerable position when he becomes a hostage. He is in mourning for his recently deceased wife, Beth, and has a strained relationship with his estranged son, Ezra. The unexpected isolation in Sam’s bleak universe makes him a prisoner of his own mind as well. He finds solace in making up imaginary conversations with his therapist, Charlie Addison, which take place in a less depressing setting. Alan is trapped in a hellish new reality, and he is forced to confront a skewed view of his religiously divided family. The Patient’s message here appears murky at first, but it matures into something deeper by the end. 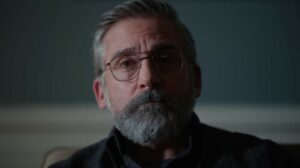 The Patient’s only flaw is that it does not provide Sam with the same level of conscious character development as it does Alan. The middle episodes feel repetitive because there is an excellent attempt to look at his upbringing but it happens a little too late (but never dull). Gleeson plays the dead-eyed Sam well, spitting out lines like “I’m just kidding; I’m not going to fuck his skull,” but it’s still a one-dimensional portrayal of a serial killer that falls short of the caliber of Paul Walter Hauser’s and Cameron Britton’s standout turns in Black Bird and Mindhunter.

Speaking of those dramas, The Patient has a similar atmosphere of two people having absorbing, unsettling conversations in oppressive settings. The show’s razor-sharp writing and direction, Carell’s masterful performance, and his ability to subtly lighten the mood with his reactions and line delivery deserve praise as well. The Patient is a brilliant and compelling follow-up from Fields and Weisberg, with a standout lead performance, even though it won’t make up for The Americans’ absence.