Stray, an Annapurna cat game, is rich in lore and worldbuilding. Indeed, the game has a fantastic story that immerses you in its science-fiction world of a dystopian, robot-populated city. However, once you’ve completed the adventure, you might want to know why the Stray ending was so abrupt. So, our Stray ending explained guide below goes over everything that happens and everything we can deduce from the final cutscene. There are major plot spoilers ahead, so return now if you haven’t completed the game.

After entering Stray’s control room and activating your computer, you’ll be able to reopen the door to the outside world, but not before your drone companion B-12 dies while assisting you in opening the escape route.

In the final Control Room chapter, B-12 figures out that the processing power required to override the system and open up the city will fry his little body. B-12 does it regardless. He collaborates with the cat to break into the computers in the Control Room, receiving a barrage of electronic zaps along the way. His drone body falls to the ground, unable to continue. B-12 appears to die, and the cat spends some time sleeping next to his lifeless robot body. 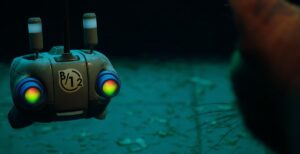 This is especially sad given that B-12’s consciousness originated in the mind of a long-dead human scientist. The death of B-12 may have marked the end of the human race. But we’ll never forget B-12’s bravery. He desired to escape the city and pass on his human knowledge, but in his final moments, B-12 stated that he trusts the robot companions and animals such as the cat to keep the planet going.

What happens to the city?

In the final chapter of the game, the walled city is opened up. Through the large window in the Control Room, you can see a massive roof opening up, allowing daylight into the city for the first time in years. The city’s robots can now live in less bleak conditions, and perhaps more of them will follow in the cat’s footsteps and leave the city for themselves.

What happens to the Zurks?

When the city is opened, a cut-scene shows various characters from previous chapters stepping into the sunlight for the first time. For the robots, this is played as a positive outcome. For the Zurks, however, the opening of the city means certain death. We see a lot of them splatter, but we don’t know if any Zurks survived. However, given that some of them lived in the sewers, we wouldn’t be surprised if they did. 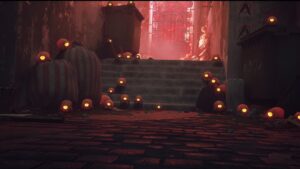 The death of so many Zurks will allow the robots and other beings still living in the city to live their lives with a lot less fear. It significantly improves the robots’ post-apocalyptic quality of life, ensuring that the Stray ending is a happy one.

What happens to the cat?

The death of B-12 means that the only thing that could directly communicate with us is no longer present. The cat will be unable to communicate with or understand any of the robots or humans it may encounter. Having said that, earlier in the game, the cat did manage to work with robots to some extent, even while B-12 was in prison. So not all hope is lost!

After walking out of the open subway door in the game’s final cutscene, we see our stray cat Protagonist walk through the door into a bright light surrounded by vegetation before looking back at the camera. We can interpret this to mean that the stray cat we’ve been controlling the entire time has made its way outside and will hopefully reunite with the cat pals it lost contact with at the beginning of the game.

This is supported by the fact that Momo in the Slums puts you on the trail of The Outsiders, a group of three robots who want to escape the confines of the walled city and return to the outside world.

So, despite the abrupt ending that doesn’t reveal much to the player, we can assume the cat completed its missions of escaping outside and returned safely to its friends. Who knows, maybe more will be revealed in a Stray sequel?

Stray Ending Explained – What Does It All Mean? Is Stray HDR Support ? The answer is : Unavailable at launch Stray doesn’t appear to officially have HDR support, at least at launch. A quick […]