We can all agree that the Kardashian/Jenner sisters share similar fashion preferences. We’ve seen them share parts in the past.

After posting identical Skims bodysuit photos to their Instagram accounts, Khloe Kardashian called Kim Kardashian out. Khloe took notice of the tweet and jokingly referred to her sister as a “b*tch” for imitating her appearance.

‘Oh ok well I didn’t look like this in mine. Ha,’ Khloe commented on Kim’s photo before adding an hour later, ‘You’re a b*tch.’

Kim displayed her most well-known feature in the onesie from her enormously popular line, which she debuted in 2019.

In a couple of photos uploaded to her grid on the photo-sharing app, the mother-of-four, who turns 42 this month, posed wearing the ensemble. The ex-girlfriend of Kanye West twisted slightly to take a selfie while standing with her back to a wall-to-wall mirror. 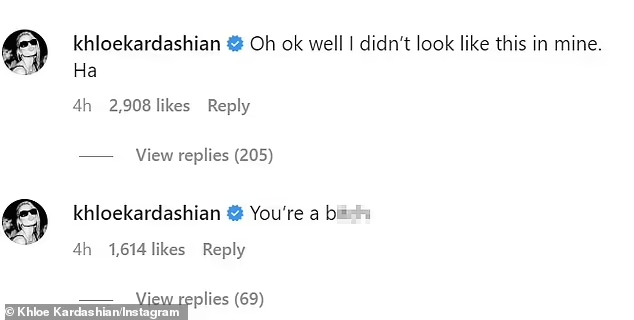 ‘I didn’t look like this in mine’: The post didn’t go unnoticed by Khloe, who jokingly called her sister a ‘b*tch’ for copying her look

Kim donned a style that was part of her steel blue collection of apparel, swimwear, and undergarments.

The always stylish entrepreneur completed the look with a pair of suede knee-high boots with a wedge heel.

She wore a little metallic silver handbag from Balenciaga, the brand she has worn frequently for the past year, in the photographs.

Kardashian wore her bleach blonde hair down and parted it down the middle to show her black roots.

The mother of four posed in the clinging one-piece for two Instagram pictures that she posted on her account.

The multihyphenate was fully made up and sporting a cat-eye made with black liquid liner.

She wore her standard ensemble, which consists of a short, natural manicure with glossy nude finish.

The pictures were taken in Kim’s opulent bathroom, which she frequently displays in her SKKN by Kim advertisements.

The backless catsuit detail showed off the fitness enthusiast’s toned back and trim waist.

Khloe donned the same same outfit a day earlier when she posted on social media.

The stunning mother of two posed while leaning on a colorful ladder in what appeared to be a backstage area.

Khloe gave the sleeveless one-piece her own spin by adorning the halter neck design with a Cuban link choker to serve as a collar.

She wore fluorescent thigh-high boots with the bodysuit, just like her older sister.