How to evolve Pawmo into Pawmot in Pokemon Scarlet and Violet 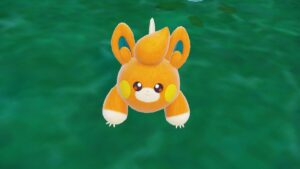 To evolve Pawmo into Pawmot, you must first get that Pawmo to walk with you by using the Let’s Go system. It must then take a thousand steps before the evolution begins. This is infuriating because Pawmo, like many other Pokemon, is extremely slow. So take it slowly, or else this Pokemon will retreat into its Poke Ball.

Put your Pawmo in the first Party slot, go back out of the menu, and then press ZR to launch its Poke Ball. It will show up alongside you in the overworld. To avoid accidentally bumping into or being chased by wild Pokemon, it is recommended that you walk with them in a town or city or somewhere quiet.

Because the game doesn’t tell you when you’ve reached 1,000 steps, do this for about five minutes to ensure you’ve met the goal. Then, either use a Rare Candy on your Pawmo or battle with it until it levels up by one, at which point it will evolve into a Pawmot if you’ve walked a sufficient number of steps.

How To Evolve Azurill In Pokemon Scarlet And Violet You must increase Azurill’s happiness to 220 in order to evolve it into Marill. Here are a couple of really simple methods:

How To Evolve Marill In Pokemon Scarlet And Violet Marill’s evolution is much easier. All you have to do is raise Marill’s level to 18. You can level them up by leaving them in your party for XP share or by using XP candies. There is a new method for sending your pokemon off to auto-battle, which will also give them a lot of XP.