In this guide, we will explain everything you need to know to complete The Shadow Of His Wings Quest in WoW Dragonflight, as well as where to find and how to use the Ruby Whelp Shell trinket.

How To Complete The Shadow Of His Wings In WoW Dragonflight When you accept the quest, a nearby cave to the west will be marked on the map. The quest’s boss, Cynegoth the Corrupted, can be found here. All that remains is for you to enter the cave, clear the mobs, locate the boss, and defeat it in combat.

Given Cynegoth’s large HP pool, we recommend clearing out the cave as you progress deeper inside. While you could try to avoid some of the mobs, a misstep could attract them to your location. Depending on your item level and party size, you may need to single out the majority of targets to avoid getting overwhelmed.

After defeating Cynegoth, you will need to return to Ayasanth to claim your reward. You’ll be able to choose between two weapons, as well as gain experience, gold, and some reputation. If you need to get to level 70 quickly, completing quick challenges like The Shadow of His Wings will be the key to boosting your experience.

Where to find the Ruby Whelp Shell Trinket in WoW Dragonflight

The Ruby Whelp Shell trinket is one of many new items added to WoW: Dragonflight. When used, it has some amusing effects and interesting abilities.

To obtain this item, you must kill a specific mini-boss from the Ruby Life Pools. They are also known as Melidrussa Chillworn and Defier Draghar. When defeated on Normal difficulty, it has a chance to drop the item you’re looking for. 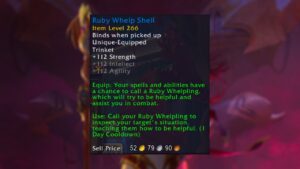 The Ruby Whelp Shell is an unusual trinket, to say the least. It gives you +96 in either Agility, Strength, or Intellect, depending on your primary stat. It also grants you the ability to summon a Ruby Whelping, which will attempt to assist you in combat as you use your spells and abilities.

At the moment, this trinket is a little buggy and strange. The Ruby Whelping appears to be rarely proccing and also depends on the situation. It can either give you a stat boost or heal you. It also casts its own spells in battle, but not very frequently. You should use this trinket at your own risk, as it currently appears to proc buffs or heals every couple of minutes.