De’Vondre Campbell, Romeo Doubs OUT for Packers vs Eagles 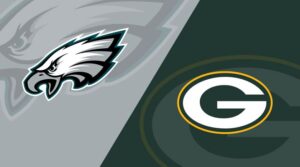 The Green Bay Packers and Aaron Rodgers are not used to being in this position after Thanksgiving. With a 4-7 record, the team is out of the playoff picture and trailing the high-flying Minnesota Vikings in the NFC North.

After losing all-pro wide receiver Davante Adams in an off-season trade, the Packers knew they had their work cut out for them this season.

They did not expect the transition to be so difficult. Green Bay ranks 26th in scoring defense in the NFL. Despite the presence of future Hall of Fame quarterback Aaron Rodgers, they rank 14th in rushing and 19th in passing.

In furthermore, the Packers are uncharacteristically 27th in turnover differential and 20th in penalties.

The Packers’ defense has also not been as strong as it has needed to be this season. This season, they rank 16th in scoring defense.

The team ranks 25th against the run, which could pose a significant problem against the Eagles’ run-heavy offense. They are better against the pass, ranking fourth in the NFL.

Doubs has yet to participate in any recorded practice activity since suffering a right high-ankle sprain in a Nov. 6 loss to the Lions, and he will now miss his third consecutive game.

Doubs appeared to make some progress Thursday, according to Kassidy Hill of the Milwaukee Journal Sentinel, when he was spotted working out with a group of other Packers players who were dealing with injuries.

While Doubs’ presence at Thursday’s session was a positive sign, he’ll still likely need to string together multiple full or limited practice sessions next week to have a legitimate shot at playing in the Packers’ Dec. 4 matchup with the Bears.

Rodgers (thumb) has publicly stated that he is playing with a broken thumb.

Furthermore, LB De’Vondre Campbell (knee) is still out, and several Packers players, including TE Robert Tonyan, have been diagnosed with the flu.

After winning their first nine games of the season in convincing fashion, the Philadelphia Eagles have been one of the featured stories of the NFL season.

This season, quarterback Jalen Hurts has emerged as an MVP candidate, capable of both running and throwing the ball.

With the best record in the NFL at 9-1, the Eagles are unsurprisingly at or near the top of several categories this season.

The Eagles have the NFL’s fourth highest scoring offense. They have the league’s sixth-best rushing attack and the league’s 12th-best passing attack.

The Eagles have been opportunistic, as well as leading the NFL in turnover differential. The Eagles also have the sixth best scoring defense in the league. The team ranks 19th in run defense and 2nd in pass defense. Philadelphia is also 13th in the NFL in terms of penalties per game.

The Eagles appear to be healthy heading into this game, with only CB Josh Jobe (hamstring) limited in practice.