Bullet Train is a semi-westwashed adaptation of Japanese author Kotaro Isaka’s bestselling 2010 novel, directed by David (Deadpool 2) Leitch, about a group of wacky assassins aboard a train, their murderous destinies all chaotically colliding, and all turning out to have more in common than they think.

A common social media refrain asks whether certain older films could still be made today due to factors such as cost, logistics, politically incorrect content, or a filmmaker’s formula-defying creative process. Bullet Train begs the question of whether films inspired by those directors should even be attempted today, unless they are being done by the original directors themselves. Here’s our review of Brad Pitt’s Bullet Train.

Despite Maria’s assurances about the job’s simplicity, Ladybug quickly faces opposition from not only Tangerine and the Thomas The Tank Engine-obsessed Lemon, but also The Prince (Joey King), a devious Brit posing as a schoolgirl; Yuichi Kimura (Andrew Koji), an anguished Japanese father seeking vengeance after his son was pushed off a roof. The list continues with Hornet (Zazie Beetz), an assassin with her own designs on the briefcase and other targets to execute; and The Wolf (Benito A Martinez Ocasio aka Bad Bunny), a Mexican cartel member who came to Japan following the death of his wife, which he blames on the unlucky Ladybug. 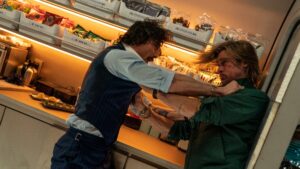 Ladybug must not only defeat these foes, but also figure out what events brought them all together. This results in a slew of flashbacks, subplots, surprises, and hidden motives, which Leitch and screenwriter Zak Olkewicz juggle with little regard for pacing or the basic logistics of the film’s setting: how long does it take a high-speed train from Tokyo to Kyoto? A quick Google search shows that the journey takes about two hours and fifteen minutes, but for some reason, this train runs all night, making Ladybug’s escalating gauntlet feel more like a meandering travelogue through the characters’ one-dimensional personalities.

Ladybug’s efforts to resolve each new confrontation run out of gas as a conflict-averse assassin, especially since Pitt has played some version of a capable dope with more words than brains. Watching the actor have fun on screen should be enjoyable, but it feels like he’s dragging the train along rather than effortlessly riding it. 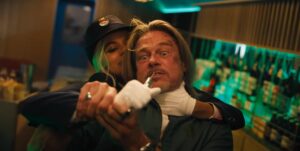 Meanwhile, as Lemon, Henry’s obsession with Thomas & Friends is reminiscent of the era when Tarantino spiced up Crimson Tide with Silver Surfer monologues. And the end result is just as irritating as watching Tarantino rant about Top Gun in Sleep With Me. Even though Taylor-Johnson created a surprisingly appealing persona for a supporting role in Christopher Nolan’s Tenet by adopting a working-class Cockney accent, he repeats himself here and reduces his charm to Guy Ritchie levels.

The less said about the rest of the cast, the better, though Koji and the always stellar Hiroyuki Sanada work hard to bring dignity to the story of their family’s multigenerational betrayals and misjudgments. But, in an act of misjudged authenticity, Leitch and Olkewicz feebly draw out those themes across the myriad conflicts and saddle these performers with them. Regardless of the controversy surrounding a mostly English-language adaptation of a Japanese novel, which Isaka has largely dismissed, what proves to be more offensive is the film’s clumsy attempt to inject seriousness into what should have been a lighthearted summer diversion. It’s fine for a film about a group of competing killers to place no value on human life, and even to revel in that kind of nihilism, but the way the filmmakers inject pathos feels as earnest and meaningful as an airport gift shop souvenir before a flight home from some far-flung foreign country. That said, whether or not Isaka began with an adequate level of originality on the page, this type of story occupies a space on screen that is simply too well-defined. Especially when it’s anchored by an equally familiar performance from Brad Pitt, but it doesn’t always generate enough wattage to energize a mediocre project on its own.

Finally, Bullet Train aims to be slick when it needs to be smart, and predictable when it needs to be provocative—making all of the wrong stops at exactly the wrong time. The issue isn’t that Leitch lacks the talent to pull off a film like this, but that he lacks personality. Rather, he possesses the ability to be a modern studio journeyman—as long as he chooses the right path.

For a time, it seemed like we had broken the video game adaptation curse, thanks in part to Netflix. With the arrival of Netflix’s new live-action Resident Evil show, we appear to be back in coinflip […]

Though the titles for a number of Marvel Studios’ upcoming films, such as Black Panther: Wakanda Forever and Ant-Man & The Wasp: Quantumania, are a little long, we’ll all know them as the projects that […]