When the Nuggets travel to Portland on Thursday, they will be looking to snap a three-game losing streak. The Nuggets won four straight games at the end of November, but they have lost their first three games this month. Portland, on the other hand, has won two straight games. 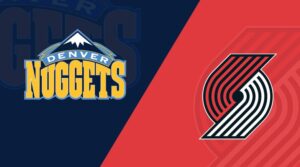 Portland also had a strong start to the season, winning nine of its first twelve games. After that, the Trail Blazers went cold, losing seven of their next eight games. Their only victory during that time period came in overtime on the road against New York.

Gary Payton (abdomen) will not play against Denver on Thursday, according to Casey Holdahl of the Trail Blazers’ official website.

Despite fully participating in practice today, Payton will require at least one more game to recover from his abdomen injury. The guard is expected to make his season debut against Minnesota on Saturday.

Keon Johnson (hip) is expected to play against Denver on Thursday, according to Casey Holdahl of the Trail Blazers’ official website.

Johnson is expected to play for the first time since Nov. 5 against the Suns due to a lingering hip injury. In six appearances, the guard has scored in double figures twice.

Denver Nuggets started the season strong, winning eight of its first eleven games. Following that, the Nuggets struggled, losing four of their next six games to finish 10-7 overall.

At the end of November, they went on a four-game winning streak, defeating the Thunder, Clippers, and Rockets (twice). Denver’s momentum has stalled in the first three weeks of December, with losses to Atlanta, New Orleans and Dallas.

Small forward Michael Porter Jr. is listed as questionable for today’s game due to a heel injury.

Due to a right wrist sprain, Kentavious Caldwell-Pope is expected to play against the Trail Blazers on Thursday.