When the Philadelphia 76ers (12-11) face the Houston Rockets (6-17) on Monday night, they will be looking to snap a two-game losing streak. Philadelphia is 7-3 in its last ten meetings with Houston. 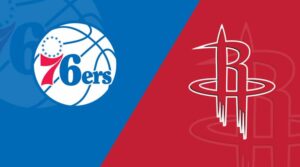 The 76ers lost their last two games after a three-game winning streak. They will try to snap their losing streak with a victory over the Rockets, which would be their fourth in the last six games.

Embiid scored 30 or more points in a loss for the second time in his last four games. Although his booms don’t always lead to Philadelphia victories, the impending return of James Harden (foot) should make things easier for Embiid.

According to Keith Pompey of The Philadelphia Inquirer, James Harden (foot) said after the 76ers’ practice session on Sunday that he’s on track to return to the lineup Monday in Houston.

Harden participated in a full-court, 5-on-5 practice for the first time since suffering a right foot tendon strain during his last appearance Nov. 2 against the Wizards.

Due to the month-long layoff, Harden said he wants to see how he feels at Monday’s morning shootaround before deciding on his status for the first of the 76ers’ three games this week.

Due to right foot soreness, Georges Niang is questionable for Monday’s game against Houston.

Niang has been held to single-digit scoring totals in all four of his recent games, averaging 7.5 points in 19.5 minutes per game.

If he is unable to play on Monday, Danuel House and Paul Reed will almost certainly see increased playing time.

Following their victory over the Suns, the Rockets fell to the Warriors in their most recent game. They will try to avenge their loss by defeating the 76ers, which would give them their second win in three games.

Houston scores 110 points per game on average. In their most recent game, they scored 101 points while making 44 percent of their field goals and 10.7 percent of their three-point attempts.

It’s unclear when Jae’Sean Tate will return, but the 2-to-3-week timetable provided in mid-November suggests he’ll be back sooner rather than later.