The (14-7) Denver Nuggets will travel to Atlanta, GA on Friday to face the (12-10) Atlanta Hawks. Both of these teams have gotten off to hot starts to start the season, but this will be their first meeting. 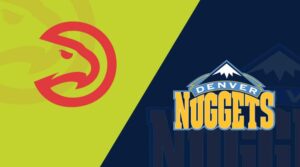 The Denver Nuggets are coming off a 120-100 victory over the Houston Rockets. Denver looked great on both ends of the floor, and if they want to challenge the Hawks on the road, they’ll have to stay consistent.

Due to a bruised right quad, Jamal Murray is questionable for Friday’s game against Atlanta.

Murray has been more consistent this month after an erratic October. He averaged 20.0 points on 46/40/84 percent shooting, 5.7 assists, 4.3 rebounds, and 1.0 steals in 31.1 minutes on 11 November appearances. The quad problem isn’t expected to stymie him on Friday.

Jeff Green (knee) is questionable for Friday’s game against the Hawks.

Green is expected to miss his sixth straight game on Friday due to a right knee contusion. If Green is unavailable against Atlanta, his next opportunity to play will be against the Pelicans on Sunday.

Meanwhile, Michael Porter (heel) is out against the Hawks on Friday.

The Atlanta Hawks are coming off a 125-108 victory over the Orlando Magic. They played excellent defense, allowing Orlando to shoot only 29.6% from deep. If they are to compete with the Nuggets, they must remain efficient on the defensive end of the court.

Due to a right hip flexor strain, De’Andre Hunter will be out for at least a week.

Hunter was injured after only seven minutes of action against Orlando on Wednesday. Hunter underwent an MRI on Thursday, and the Hawks confirmed he will be out for at least the next week. The 25-year-old will miss Atlanta’s games against Denver, Oklahoma City, and New York due to the injury.

John Collins will be out for at least two weeks due to a sprained left ankle.

Collins was injured in the first half of Wednesday’s game and was ruled out for Friday’s game. Tests on Thursday confirmed the sprain, which will keep him out for at least two weeks.

Justin Holiday (COVID-19) will miss Friday’s game against the Nuggets.

Holiday will miss his second straight game on Friday due to the league’s health and safety protocols. Holiday’s next opportunity to play will be against the Thunder on Monday.

Bogdanovic (knee) is questionable for Friday’s game against the Nuggets, according to Brad Rowland of Locked on Hawks.