Cole Kmet (born March 10, 1999) is an American football tight end for the National Football League’s Chicago Bears. He attended Notre Dame and was selected by the Bears in the second round of the 2020 NFL Draft. 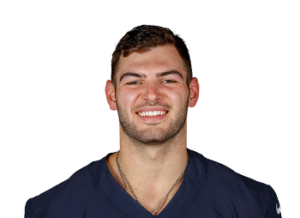 Kmet returned to the field one day after being sidelined with a thigh injury on Wednesday and managed to log some reps. Finally, the practice report on Friday will reveal whether he’ll carry a designation into the weekend ahead of Sunday’s game in Atlanta.

If he is able to play, Kmet will look to continue his recent hot streak, which has resulted in an 11-126-5 line on 15 targets over the last three games.

Kmet is entering his third NFL season following a bizarre 2021 season in which he was a featured target but couldn’t find the end zone.

Kmet finished second in tight end snaps and no lower than 12th in routes, targets, receptions, and yardage. He also had six end zone targets (the 14th most) but failed to score a touchdown.