Cam Akers (born June 22, 1999) is an American football running back for the National Football League’s Los Angeles Rams (NFL). He attended Florida State and was selected by the Rams in the second round of the 2020 NFL Draft. 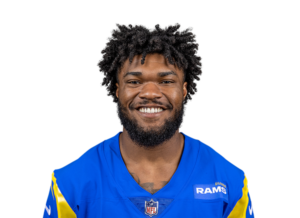 UPDATE (Dec. 13): In the Rams’ 17-16 win over the Raiders on Thursday night, Akers rushed 12 times for 42 yards and a touchdown while catching his only target for one yard. He also fumbled once.

UPDATE 2: Akers carried the ball 17 times for 60 yards and two touchdowns in Sunday’s 27-23 loss to the Seahawks. He also caught his only target for zero yards.

UPDATE: Cam Akers (illness) is listed as questionable for Sunday’s game against Seattle, according to Gregg Bell of The Tacoma News Tribune.

Cam Akers was one of a few players across the league who missed practice due to illness to begin Week 13.

Normally, a Wednesday illness designation does not result in anything significant. However, we have seen problems persist with players either missing games (Damien Harris) or struggling during the game (Davante Adams & Darrell Henderson).

This is one to keep an eye on in the coming days because the impact on fantasy value could be enormous. If Akers is out or limited this week, Kyren Williams becomes an extremely appealing fantasy option. If Akers is unavailable, Ronnie Rivers will most likely fill in on the field.

If the Rams start working out extra backs this week, we’ll get a sense of how serious the situation is.

They currently have no backs on their practice squad, so they may want to add an insurance option if Akers is unable to play this week.