When the Los Angeles Lakers face the Philadelphia 76ers on Friday night, they will look to snap a two-game losing streak. 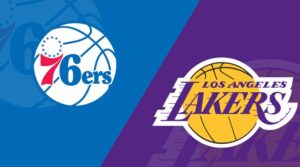 Los Angeles Lakers had won five of its previous six games before falling to the Cavaliers and Raptors in its final two. Following a double-overtime loss to Houston on Monday, Philadelphia 76ers is on its own three-game losing streak.

This season, the Lakers had a terrible start, dropping 10 of their first 12 games. The Lakers were able to avoid spiraling completely out of control by winning eight of their next 10 contests, with the two losses coming to Phoenix and Indiana.

Due to the absence of LeBron James (ankle) and Anthony Davis (flu), the Lakers were extremely undermanned on Friday night.

Juan Toscano-Anderson, a small forward, started the game against Toronto on Wednesday before suffering an ankle injury that will keep him out indefinitely.

For this match, James, Davis, and Beverley are all listed as game-time decisions.

The Philadelphia 76ers are currently on their second three-game losing streak of the season; their first one occurred during their first three games of the year against Boston, Milwaukee, and San Antonio. Before their current losing streak, the 76ers won 12 of their subsequent 18 games.

Tyrese Maxey, the point guard and the team’s second-leading scorer with 22.9 points per game, is still out for the Philadelphia 76ers due to a foot injury.

Georges Niang (foot) will not play against the Lakers on Friday.

Niang missed Thursday’s practice as well due to a sore right foot, and he will miss his second straight game on Friday. The 29-year-old forward’s next opportunity to play will be against Charlotte on Sunday.