The Detroit Lions have announced their Week 12 injury list for their Thanksgiving Day game against the Buffalo Bills, and they will be missing five players, including four starters, two on each side of the ball.

Will Josh Reynolds playing vs Bills? 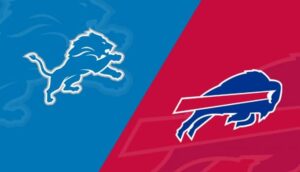 Josh Reynolds (back) is listed as questionable for the Bills game on Thursday.

While practices are only walkthroughs, Josh Reynolds is expected to have gotten in two limited practices this week and appears to have a legitimate chance of returning to the lineup on game day.

While Reynolds is on the mend, it’s worth remembering that he appeared to be on the mend last week as well but was eventually downgraded to out ahead of the game. So be cautiously optimistic here.

Meanwhile, Jonah Jackson (concussion) will miss the Lions’ Week 12 game against the Bills.

The following are the most recent injury reports for the Buffalo Bills and Detroit Lions ahead of their Week 12 matchup at Ford Field:

Notes: The Lions players listed as out are all starters.