The Chicago Bulls will play the Utah Jazz in Salt Lake City on Monday. The game will begin at 9:00 p.m. EST inside Vivint Arena. 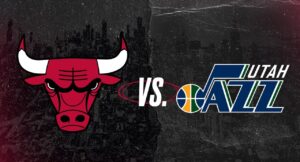 Rudy Gay will be out for at least two weeks due to a left finger sprain, according to Andy Larsen of The Salt Lake Tribune.

The Utah Jazz enter this game after a 113-111 loss to the Phoenix Suns. This was their fourth straight loss, as they have struggled on defense.

The Jazz shot 50.6% from the field but couldn’t come up with enough stops to win the game. If they want to take care of business at home against the Bulls, they will have to apply more pressure.

The Utah Jazz have gotten off to an unexpectedly hot start this season, continuing to attack. They are currently eighth in the Western Conference standings, but their last ten games have seen them go 3-7. Utah is 2.5 games behind the first-place Phoenix Suns.

Lauri Markkanen continues to lead this team in scoring, averaging 21.7 points per game on 52.1% field shooting.

However, he is currently listed as questionable for this game. Before you place your bet, make sure to check the injury report.

However, Utah has struggled from a charitable standpoint. They have only made 78.5% of their free-throw attempts, which is the league’s 17th-lowest team free-throw shooting percentage. They can’t afford to miss out on these open looks at the rim and expect to win these games.

According to K.C. Johnson, Bulls coach Billy Donovan is “very optimistic” about Ball’s recovery but has not provided a timetable for his return.

The Chicago Bulls are currently 12th in the Eastern Conference standings, having gone 3-7 in their last ten games. They are also seven games behind the league-leading Boston Celtics.

DeMar DeRozan continues to lead his team in scoring, averaging 26.2 points per game on 51.7% shooting from the field.

Chicago has also demonstrated that they have multiple players who can step behind the arc and hit deep threes.

They are shooting 36.6% from deep, which is the NBA’s 12th-best team three-point percentage. The Bulls have also taken care of business at the charity stripe, as they haven’t squandered their chances at the rim.

They are shooting 83% from the free-throw line, which ranks them fourth in the league.
If the Bulls are to win, they must consistently get more stops on the defensive end of the court.

Lonzo Ball, PG (Knee), is listed as out for this game.