The Detroit Pistons will conclude their six-game road trip on Friday, November 25, 2022, with a cross-conference game against the Phoenix Suns at Footprint Center in Phoenix, Arizona, with tip-off set for 9:00 PM ET. 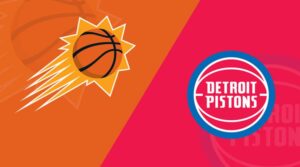 You can read also: The latest injury status of Tobias Harris and Joel Embiid for 76Ers vs. Magic game

After snapping a seven-game losing streak with a 110-108 victory over the Denver Nuggets, the Pistons defeated the Utah Jazz 125-116 on the road this past Wednesday.

Last Wednesday, the Pistons had 24 assists and only seven turnovers.

Bojan Bogdanovic had 23 points and five rebounds, Kevin Knox had 21 points and a plus-9 net rating, and Marvin Bagley III chipped in 19 points, six rebounds, a couple of assists, and a steal.

Cunningham (lower leg) is expected to be out indefinitely due to a stress fracture in his shin, according to The Athletic’s James L. Edwards III.

For Cunningham, the team is considering both rest and surgery. The Pistons are expected to invest in the future health of the No. 1 overall pick in 2021 and have no intention of rushing him back, which makes sense for a rebuilding Detroit team.

It was the Suns’ second straight victory, and they covered the spread for the fourth time in five games, covering a 9.5-point spread.

Their defense is ranked sixth in terms of adjusted efficiency (109.6 points per 100 possessions) and seventh in terms of field goal percentage (45.5%).

Chris Paul (heel) has resumed practice but will miss his eighth consecutive game on Friday. Cameron Johnson (knee) will be out for some time, and Landry Shamet is still in the concussion protocol.

Deandre Ayton had a double-double of 14 points and 15 rebounds. The Suns shot 16-of-34 from beyond the arc and dished out 23 assists.

Ayton had his hands full against Anthony Davis, but he nevertheless managed to put up an excellent total. Ayton is starting up a bit of a streak, as Tuesday marked his third consecutive double-double.