The Rockets will play the Spurs on Thursday in San Antonio, Texas. Neither of these teams has had the ideal start to the season, but they will be hoping to change that in this game. 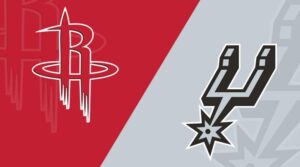 The San Antonio Spurs enter this game after a 133-95 loss to the Phoenix Suns. The Spurs were terrible on both ends of the court, and if they want to compete with the Rockets at home, they need to get more stops.

Concerning the Injury Report: Doug McDermott SF (Ankle) and Romeo Langford SG (Back) are both listed as questionable.

Due to back tightness, Langford (ankle) is listed as probable for Thursday’s game against the Rockets, according to Jeff Garcia of KENS 5 San Antonio.

Langford had only played eight minutes in the previous game due to an ankle sprain. Instead, the injury report indicates that he is dealing with lower back tightness, which does not appear to be a major concern.

Josh Richardson (SG) is listed as probable with an ankle injury.

The Houston Rockets are coming off a 132-123 victory over the Philadelphia 76ers. Houston looked fantastic on the offensive end of the court, scoring throughout the game. If they want to challenge the Spurs on the road, they must stay hot in this one.

Jae’Sean Tate (ankle) was cleared to return to the court on Monday, according to Jonathan Feigen of the Houston Chronicle.

Tate’s participation in the activity is a step forward in his recovery from a right ankle injury that has kept him out since late October.

Though the Rockets haven’t provided an official timeline for Tate’s return, given that he has yet to return to practice, he can probably be safely ruled out of Thursday’s game at San Antonio.