When he resulted in a one-year suspension for the coach, Ime Udoka’s future coaching was jeopardized. NBA agent drops a huge truth bomb on his coaching future: “He’s done.” 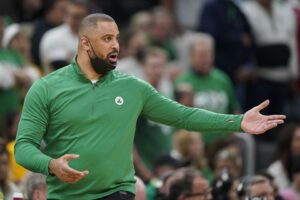 Nothing about Ime Udoka’s present situation appears to be straightforward. After leading his team to the NBA Finals in his first year, Udoka’s relationship/affair with a fellow Celtics staffer was revealed this summer, and the coach was suspended for one year.

But that’s not enough. Since the scandal appeared, various sources have hinted that there is much more to the crisis than has been disclosed thus far, and that it will become ‘ugly’ when the actual facts are revealed.

“It sounds like there is a lot to this story that may come out, may not come out, but it sounds like a lot of people are gonna be affected in pretty messy, ugly ways,” said ESPN’s Ramona Shelburne. “I don’t know if we can all judge later on because this is a fair enough punishment, but I know that Ime Udoka is one of the best young coaches in the league, that he took the Boston Celtics to the Finals last year, and for them to consider such a massive penalty, it has to be pretty severe. So, obviously, it’s going to change the dynamics in the team now, it’s really gonna change the dynamics of their season, and we just have to trust the investigation and people handling it at this point.”

One NBA agent is now reportedly persuaded that the full extent of the scandal will cost Udoka his job.

“Given that report, and everything else said in private, an agent friend of mine delivered a verdict on Ime Udoka’s NBA head coaching prospects: ‘He’s done.'”

“My guy’s not the only one saying it. This is how many NBA insiders now see the situation, and have seen it since Thursday, really. While nobody can completely predict the future, it is a widespread interpretation of present events.”

We don’t yet know the full context of the circumstance or which version of events is closest to the truth. However, based on what many of these insiders are saying, the result is certain to be disastrous for Udoka’s coaching career.