After his allegation ‘sleeping around’, Ime Udoka continued to reportedly make ‘unwanted comments’ to a female Celtics staffer regarding an alleged issue. 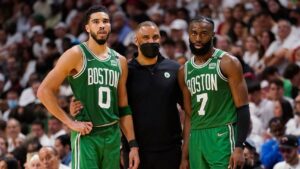 As information about the Celtics’ decision to suspend coach Ime Udoka for the full 2022-23 season for “violations of team policies” emerged, questions remained about the timing and severity of the punishment.

Earlier, reports about Udoka’s relationship with the staff member suggested that it was mutual.

“Some members of the Celtics organization first became aware of the relationship in July, sources said,” Charania wrote. “At that time, team leadership was led to believe by both parties that the relationship was consensual. But sources said that the woman recently accused Udoka of making unwanted comments toward her — leading the team to launch a set of internal interviews.”

“The team’s decision and announcement came after a closed-door meeting Thursday that involved team owners and president Brad Stevens and lasted several hours, sources said,” via Charania. “Earlier Thursday, Stevens and members of the Celtics front office met with players at the team facility.”

Udoka stated in a statement following the suspension that he accepted the team’s decision.

Ime Udoka allegedly had a scandal with a Celtics employee who assisted his fiancée Nia Long in relocating to Boston.

Ime Udoka had a scandal with a Celtics staffer who was involved in Nia Long ‘s plans to permanently relocate to Boston. Nia Long relocated to Boston permanently The Boston Celtics postponed Udoka for the […]

Ime Udoka allegation relating to a Twitter ‘sleeping around’ drama. The accusation leveled against Ime Udoka prompted the Celtics to conduct an internal investigation. ‘Sleeping around’ tweet adds another twist to Ime Udoka Celtics scandal […]