Here’s everything you need to know about obtaining Fire and Forget & Retrofit Escapade in Destiny 2 Season of the Seraph, as well as the best God Rolls to aim for with them.

How to Get Retrofit Escapade in Destiny 2

Retrofit Escapade can be obtained from H.E.L.M. and seasonal activities. You can also craft it once you have enough Deepsight versions. 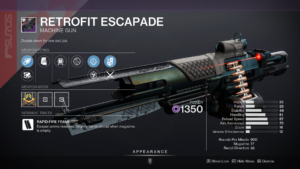 Retrofit Escapade has a few perks that pique my interest. Target Lock, for example, is a perk that increases damage the longer a weapon fires at a single target, and Fourth Time’s the Charm is a perk that is typically found on scout rifles, snipers, and similar weapons because it relies on precision hits. The two appear to be a natural match, but whether they add up to a weapon worth using against tougher targets than more traditional linear fusion rifles, snipers, and so on remains to be seen. If the damage boost from Target Lock isn’t too impressive, a simple Feeding Frenzy/Rampage roll is probably the best option.

Retrofit Escapade works fine in PvP. Heating Up/Rampage is a good kill-chaining combo, but Tap the Trigger provides a dueling boost as well. In the Crucible, you should definitely switch to the Ambush Origin Trait to gain an advantage in range, handling, and damage in the early stages of an engagement – especially since Suros Synergy is unlikely to be useful on a heavy weapon.

How to Get Fire and Forget in Destiny 2

This weapon, like Retrofit Escapade, can be obtained through Season of the Seraph seasonal activities, H.E.L.M, or by crafting it with Deepsight versions. As a Stasis weapon, Fire and Forget can benefit more easily from Font of Might, which means it has the potential to become a DPS standard for Stasis users. Focused Fury is your go-to damage perk in that capacity — there’s no Firing Line on this thing, but that’s fine. Field Prep works well with Veist Stinger and allows for faster reloads while crouching.

To be honest, Fire and Forget is unlikely to wow as much in the Crucible as it does in PVE. You have Rangefinder, which is nice, but a standard, non-aggressive linear fusion rifle will get you more hits. It might work, but there are better alternatives for your heavy slot.