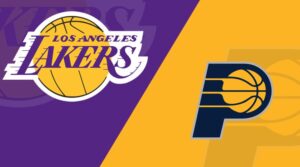 When the Lakers play Indiana, they will try to extend their three-game home win streak. The Lakers have a 5-5 record at home. Los Angeles is last in the Western Conference in 3-point shooting at 31.9%.

LeBron James (leg) is expected to play against the Pacers on Monday.

At this point in his career, it’s not surprising to see James on almost every Lakers injury report, especially as the season progresses.

However, the star forward, who scored 39 points against the Spurs on Saturday, should be able to handle his normal workload on Monday.

Athony Davis (calf) is listed as doubtful for Monday’s game against the Pacers.

Davis did not play in Saturday’s victory over the Spurs. The way he feels on Monday will be crucial in determining whether the star big man returns to the court, but if he can’t, Thomas Bryant will be in line for another start at center.

The Pacers are 4-4 on the road. With 28.0 assists, Indiana leads the Eastern Conference. Tyrese Haliburton leads the Pacers with 11.1 points per game.

Duarte was preparing to play again during the Pacers’ seven-game road trip, which begins on Sunday. Duarte has been out with an injury since November 4.

While Duarte is unlikely to play on Sunday, he could join the Pacers at some point during the trip if he continues to make steady progress in his recovery from a left ankle sprain.

The Pacers are continuing to evaluate Andrew Nembhard’s status on a game-by-game basis, so the rookie could be ready to play against the Lakers on Monday.